Do You API? Understanding This Important Tool in Your Innovation Toolkit

In today’s digital environment, hardly anything is set-it-and-forget-it, and ongoing innovation is essential. Successful businesses constantly evolve to keep up with trends — or even set the trends themselves. And for companies with a significant digital component, Application Programming Interfaces (APIs) are an important tool in the innovation toolkit. We’ve seen all manner of companies experience success using web-based APIs, including fresh technology startups, big tech companies like Amazon and Google, retailers like Walmart and Sears, and government institutions like The World Bank and New York City.

Here’s the bottom line: If software and web applications are a part of your business, but you are not currently building APIs, you probably should be. Why? Each company is different and may have unique goals, but APIs support some pretty foundational and powerful capabilities, outlined below. But first, let’s get technical for a moment.

For those of you who generally stay away from technology acronyms, APIs can be thought of as a layer that separates and insulates your core company data from the consumers of that data. Here’s a pretty picture: 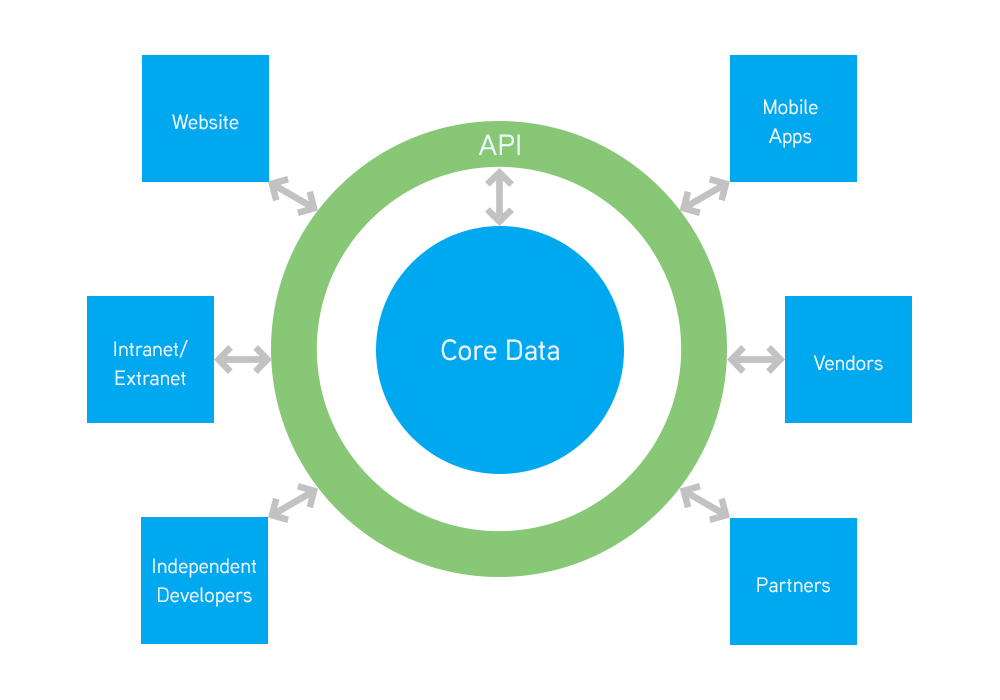 APIs are hardly new. In fact, the idea that programmers should create well-documented access points to allow other programmers to interact with their systems predates the Internet, the cell phone, the personal computer, and bell bottom pants by many years! But the rise of the web and the opportunity to interconnect vast numbers of independent systems has dramatically increased the prevalence and significance of these concepts in modern systems.

Perhaps the most compelling reason to create an API lies in the access to developers and new ideas. Twitter, Facebook, and even Walgreens are great examples of this. Sure, you say, “Twitter and Facebook are tech companies, of course they have APIs.” But that wasn’t always the case. In fact, Twitter did not begin to really explode until 3rd party developers created better user interfaces on top of their API. It took Facebook several years to release APIs and launch a developer program, but the result has been the development of literally millions of 3rd party applications that enrich the Facebook environment.

And then there’s Walgreens. On the surface it may not seem obvious why an old school retailer would publish an API, but by opening access to their rewards, photo printing, and pharmacy systems, Walgreens has also benefited from the bevy of developers out there with talent and ideas. One of those developers created a photo printing app that has been very popular and resulted in a significant uptick in customer engagement. The API is successfully driving customers into Walgreens stores to pick up photos within an hour of shooting them on their phones.

Get Big Ideas — for Free

An API can add cutting-edge ideas and functionality to your digital properties for little to no cost. For example, some of Facebook’s most popular applications are games like FarmVille, which were developed by Zynga and cost Facebook next to nothing. The result is a win-win for both Facebook and Zynga.

APIs also enable you to achieve consistency across all platforms and reduce development and support costs. A logic change can now be coded once in the API layer and impact all of the platforms automatically. All that not only saves money, but also get you to market faster.

Notice in the API 101 diagram that only the API has direct access to your core data. This allows you to focus your security efforts in one place, and we all know that data security is critical. Just ask Sony, Target, Home Depot or one of the other mega-corporations that has fallen victim to hackers recently. Admittedly, there is no silver bullet when it comes to data security, but every bit helps.

The API layer doesn’t simply concentrate data access along a single channel, it also provides an opportunity to centralize business rules. Consider a real estate company that wants to make sure an end user who runs a search will get the same results (and in the same order) no matter which platform they use: web, mobile, or tablet. Rather than have potentially three different developers attempt to code the same logic, those developers simply need to make a request to the API.

An API also provides a mechanism for integrating disparate applications within an organization. Legacy systems abound that are difficult to simply replace. As an alternative, wrapping these aging platforms with APIs can allow organizations to make the most of the systems and data that are already in place without a costly rip-and-replace process. New applications that rely on those legacy systems can then be created quickly using modern technologies.

Get Started on Your API

The process is actually pretty straightforward. Here are the three primary phases of work we undertake when building an API for a client:

In our view, APIs are one of the most exciting solutions out there. If you’re looking for a cost-effective way to innovate, it’s time to API!

Why You Need Fantastic QAs on Your Dev Team